Meet Jean Rene Jean Gilles and Jerome Ebrison.  These two studious, young men have been waiting patiently for more than a year to enroll at CFFL, PIA’s vocational agricultural school.   This year, their perseverance paid off – they were accepted, and are now officially members of CFFL’s freshman class. Both are now experiencing the joys of the classroom, embracing the camaraderie of their fellow students, and thanking some pretty special sponsors whose support made their dream come true: the middle school youth at Christ Church Episcopal.

Jean Rene’s and Jerome’s academic journey began at La Pleiade school in Cange, Haiti, with the financial help of these dedicated middle schoolers.    They held fundraisers, get-togethers, and Christmas tree sales to pay for both young men’s education at La Pleiade. Without this critical financial support, both Rene and Jerome, who come from rural disadvantaged households with little means to afford school fees, would not have realized their dream of an education. 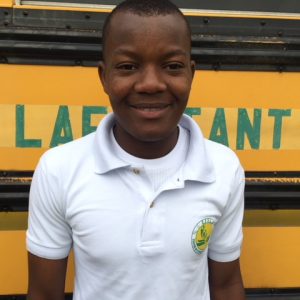 After finishing their final year at La Pleiade and passing state exams, Rene and Jerome were faced once again with no immediate opportunities to further their education at college or a vocational school.   While they waited for open enrollment spaces at CFFL, they decided to broaden their hard-earned academic credentials by volunteering in the fields and nurseries at Corporant and getting some real-world experience.  Again, their persistence and perseverance paid off. CFFL admission spaces opened up, they’re now in class, and loving this year at CFFL.  Their academic preparation at La Pleiade prepared them well; Jean Rene scored the highest on the entrance examination, and was named Laureate of his freshman class.  His academic performance and potential earned him a Christ Church scholarship. Jerome’s dedication earned him a sponsor for his studies as well and both young men are determined to make the most of this incredible opportunity. An opportunity that began with the wonderful support of the middle school youth at Christ Church, and will continue with the support of the full Christ Church congregation.

Helping young men like these two really brings home the impact and importance of scholarships for those young people who otherwise would be unable to continue their studies, despite their promising ability and desire for a better and more meaningful future.  We are proud to have them as part of the new student body at CFFL!